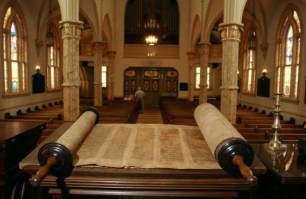 As Christians, do we fully appreciate our Jewish heritage?

In Luke’s narrative of two disciples walking on the road to Emmaus, Jesus comes up along-side of them and asks what they are talking about.  Not recognizing him, they describe the astonishing events of Jesus’ arrest, crucifixion and supposed resurrection. They wonder what it all means.  Jesus gently chastises them for being slow of heart to believe all that the prophets had said about him, and that he had to suffer these things to enter into his glory.  “And beginning with Moses and all the prophets, he explained to them what was said in all the scriptures about him.” (Luke 24:13-35)

As Christians, it is tempting for us to focus primarily on the New Testament. Yet even the gospels in describing the life and words of Jesus, make numerous references to Old Testament events and prophesies.

In Genesis, God tells Abraham before he is circumcised and the Jewish covenant is established, that he will be the father of many nations. (Genesis 17:6)  He tells Moses that he will raise up a prophet like him who will teach people everything God commands. (Deut. 18:18)  There are of course numerous references in Isaiah to the birth and coming of Jesus, along with a description of his character and purpose. (Is. 7:14; 9:6; 40:10-11; Chapter 53 and more)

In Isaiah 53, the writer speaks of the suffering servant, Israel, which later becomes a description of Jesus, bringing redemption and salvation to a sinful world.  “Yet it was the Lord’s will to crush him and cause him to suffer, and though the Lord causes his life to be a guilt offering, he will see his offspring and prolong his days, and the will of the Lord will prosper in his hands.” (Isaiah 53:10)

Jesus connects us with the Jewish people and their heritage whether we realize it or not.

This heritage, which enriches the understanding of our Christian faith, is not unlike the Christian heritage provided by our parents and grandparents who leave us a legacy of teaching and example.

Since my mother was Catholic and my father Baptist, growing up in the 1940’s and 50’s, I had the benefit of an ecumenical Christian heritage.  From my father and grandparents, I saw a steady faith with a focus on scripture.  From my mother I saw a special reverence and piety in her prayer and sacramental life.  From them flowed a conscience of right and wrong that carried me until the day I had my own personal encounter with Jesus and the power of his Holy Spirit in the context of my Catholic faith.

Heritage is part of God’s plan for his creation — each generation passing on how they have experienced God and what they have learned from the time of Abraham to the present day.  We Christians share so much with the Jewish people – the same God and father, the Ten Commandments, the Old Testament prophets, the wisdom literature, and the sacredness of life.  May we one day share the same Messiah!

2 thoughts on “Our Jewish Heritage”