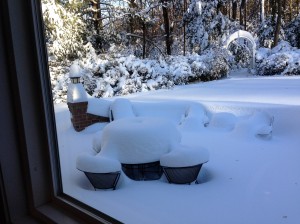 The Book of Hebrews says, “Encourage one another daily, so that none of you may be hardened by sin’s deceitfulness.” (Hebrews 3:13)  The Gospel of John explains what “sin’s deceitfulness” means when it tells us that the devil “is a liar and the father of lies.” (John 8:44)  His most frequent lies are that we are not worthy, that we are not loved or appreciated, that what we do doesn’t matter, and that God does not really care about us or our lives.

These lies seek to oppress us.  They cause us to forget that we are God’s special creation, made in his image and likeness with the important task of taking care of the garden of his creation and establishing his kingdom on this earth.  These lies can be disabling.  They derail us from the reason for our being. They prevent us from carrying out the work God has in mind for only us to do in the context of the people and circumstances of our lives.

The antidote for these lies is encouragement.  Psalm 10:17 says God encourages the afflicted.  We are his agents for encouragement.  It is an act of love.  One of the ways he shows his love for us is through the encouragement of one another.

During this past weekend, those of us living in the Washington D. C. area were snowed in with more than two feet of snow.  Since we were confined to the house, I decided to clean out my home office of old files, records, bills, letters, magazines and other materials that had accumulated over many years.

One cabinet shelf included cards and letters from my wife, children, grandchildren, parents, and friends dating back as much as 40 years.  There were cards covering birthdays, anniversaries, Father’s Day, Valentine’s Day, letters from former work colleagues and friends, get well cards when I had cancer surgery, and thank you notes for a variety of things.  Of course, I couldn’t throw them away without reading them.

Over the next several hours as the snow was accumulating outside in record proportions, I was bathed in an avalanche of encouragement and love! Countless expressions of affirming love from my good wife and children, specially designed picture cards and artwork from grandchildren, a poignant letter from my father at crucial time in his life, letters from friends reminding me of special times long forgotten, a thank you note from the husband of a former secretary who died prematurely of colon cancer — were among the treasure trove of love and encouragement.

How reassuring it is that God, our Father, should concern himself with a practical thing like a wedding party running out of wine.

Jesus and his disciples, along with his mother, Mary, had been invited to a wedding in Cana. (John2:1-11) At the reception, Mary learns that the host had run out of wine and asks Jesus to remedy the situation.  Though Jesus first responds that the time for his manifestation has not yet come, he accedes to his mother’s presumption when she instructs the servants to do whatever he tells them.  He instructs the servants to fill some large jars set aside for ceremonial washing with water, draw some out and take it to the headwaiter.  After the headwaiter had tasted the water turned into wine, he exclaims to the bridegroom that he had kept the best wine until the end.

There is a common notion by some Christians that we should only seek God’s assistance in important matters and not bother him with practical every day needs.  Situations involving life and death or economic calamity may qualify, but surely not replenishing the wine supply at a wedding party.

Yet, that is exactly what Jesus did at the request of his mother.  God places no restrictions on what we may bring to him in our requests for his action.  St. Paul says, “Do not be anxious about anything, but in everything, by prayer and petition, with thanksgiving, present your requests to God.” (Phil. 4:6)

As father of the bride and host of three of our daughters’ weddings, I would have been horrified if we had run out of wine.  No doubt Mary was a close friend of the family hosting the wedding at Cana, and brought God’s mercy to bear through her son Jesus.

Over the years, my wife and I have brought all manner of requests to God, our Father, from mundane things like a parking place at a busy shopping center to the healing of a daughter’s heart born with holes between the auricles and ventricles.  We have prayed for where we should live, the health and well-being of our children and parents, good schools, good neighbors, good friends for our children and their future spouses, safety in travel, wisdom in our relationships, and that we would all come to know God more each day.

We should not forget that in his suggested prayer to us, Jesus asked us to pray each day for our daily bread.  It is only natural that God, who created us in his image and likeness and entrusted us with taking care of his creation, would want to respond to our requests for the practical needs of life.

What is your stereotype of evangelization?

For many of us when we hear the word evangelization, we conjure up images of someone handing out Christian tracks on a street corner, the broadcast of a televangelist in a mega church, or a famous preacher in a large stadium.

The prophet, Isaiah, in speaking about the coming of Jesus gives us a different perspective.  “He will not shout or cry out or raise his voice in the street.  A bruised reed he will not break and a smoldering wick he will not snuff out.”  Isaiah 42:2-3

Jesus did not need to shout or raise his voice in the street to proclaim the kingdom of God.  His concern was for the broken hearted (the bruised reed).  He would not snuff out the smoldering faith of the weak and downtrodden.  He wouldn’t do the usual things we think of to get attention, to promote a cause or persuade others with an argument.  “My ways are not your ways,” God says.  Jesus simply responded with compassion, mercy, wisdom and God’s power.

Although the above words may have been intended by Isaiah for God’s incarnation in Jesus, they are also applicable to us, his followers and successors.  We are God’s current day incarnation, for he has given us the same Spirit that he gave Jesus.  The following story illustrates how this can work.

Jerry works in a medical office and wasn’t feeling well.  So, he asked his boss, Karen, who oversees the administrative staff, if he could have the rest of the day off.  When Karen asked what was wrong, Jerry offered a rather vague response.  Karen continued to probe, asking if he would be returning tomorrow.  Jerry said he didn’t know.  Karen asked if there was something wrong and Jerry said no.  She invited him to sit down and he started to share that nothing was going right in his life.  He wanted to get married to the woman he was living with, but she didn’t want to and was in fact talking about moving out.  He was having difficulty finding enough time for his two small children and relating to them in the right way.  He seemed quite despondent to Karen.

As he was leaving, Karen asked if she could make a suggestion.  He said yes.  “When you go home, go into your bedroom, close the door, kneel down and ask Jesus to come into your life and help you.”  Jerry said, “I’ve tried church.”  Karen said, “I am not talking about church, I’m just saying that if you offer that prayer, Jesus will not refuse you, and things will start to change.”

Sometime later, Karen noticed that Jerry appeared to be happier and had a more positive attitude.  She asked how he was doing.  He smiled, and said, “I did what you suggested and something did happen.  I started to feel warm all over when I prayed.  Later, I bought a Bible and started reading it.  I bought a Children’s Bible and started reading the stories to my kids.  We have started to go to church and my partner and I are moving toward marriage.”

You will notice that Karen did not judge Jerry or preach to him. She gave him an opportunity to talk, she listened, she empathized, and she asked if she could make a suggestion. She related to him as Jesus would. A “bruised reed” she did not break.

How do we reflect the presence of Christ to the people and circumstances in our lives — with shouts of judgment and argument, or with mercy, wisdom and the power of the Holy Spirit?  The latter is evangelism.

Did Stephen’s intercessory prayer at the time of his stoning have an impact on Paul’s conversion?

The Book of Acts reports that while Stephen was being stoned, he fell to his knees and prayed, “Lord do not hold this sin against them.” (Acts 7:60)  Watching on approvingly was a young Pharisee named Saul, later to become St. Paul.  Is it possible that Stephen’s intercessory prayer impacted Paul’s heart and opened the door to God seeing in Paul the potential to be God’s spokesman to the Gentiles?

While we can’t be certain of the answer to this question, at the same time we should never underestimate the impact of intercessory prayer.  We know that a similar prayer by Jesus from the cross had an impact on the centurion who oversaw Jesus’ Crucifixion.  In Luke 23:47, we read, “The centurion, seeing what had happened, praised God and said, ‘Surely this was a righteous man.’”

When it comes to intercessory prayer, we can easily make the mistake of thinking, “Who am I that God should listen to me and change the order of nature or human life.”  Yet, Jesus urges us to “Ask and it will be given to you; seek and you will find; knock and the door will be opened for you.” (Mt. 7:7)  He offers the parable of the persistent widow to show how we “should always pray and not give up.” (Luke 7:7)

Last summer we spent a week at the beach with all 24 of us under one roof.  Over the Thanksgiving and Christmas holidays, we were able to be with each of the families.  With my wife’s initial prayers and our ongoing intercession over the years, we can echo the words of John’s gospel, “From the fullness of his grace we have received one blessing after another.” (John 1:16)

Inside my Bible I keep a yellow sheet of paper with numerous people’s names that need prayer for healing, discernment, guidance, protection and conversion.  Some of the people don’t even know that I am praying for them.  Others I have lost contact with, but I keep praying.  I don’t need to know the outcomes.  We never know when perhaps another St. Paul might be the result.